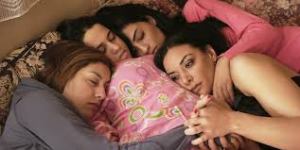 Nabil Ayoush’s film is about Moroccan prostitution, seen through the eyes of a group of working girls, encapsulating their world and clients, as well as their victimisers, and showing their relationship to figures of authority and power contrasted with their own powerlessness. The film follows their lives while they ply their trade in Marrakech, touching on transvestism, homosexuality/gay prostitution, lesbianism, police corruption and brutality, drugs, alcohol, and the not so visible paedophilia. The film portrays the group of prostitutes in the light of their work and dreams, charting the girls’ hardship and their longing to escape their existence that seems to offer nothing but a lifestyle spiralling into hedonism and brutality, heading inevitably towards destruction, with the promise of escaping to Europe as their best hope of being saved.

Ayoush dared to place Beloved with the Moroccan commissioning board for approval, although shocked when his movie wasn’t met with the acclaim by the Parliament and Moroccan Ministry of Communication (MMC) he’d hoped for. Its chief, Saim fassi-Fihri, who oversees the rules concerning the Moroccan film industry, was reported to have said that “Due to its crude language it would not have been passed at the level of commission…”. Considering the conservatism of the country, it was somewhat naïve of Ayoush to expect any favours from the censors for a sexually-charged and steamy prostitution-based film. It is certain that his work of art proved too hot for the Moroccan palate, although Ayoush’s defence was that “there are prostitutes everywhere in Morocco”. Did he really think that the board somehow might be desensitised to such a topic, and that it wouldn’t have erupted in emotional bursts of anger? It was hardly surprising that it did, and caused further outrage not just among the volatile general public, but also among Moroccan actors and actresses, and provoked howls of outrage on the social media, and death threats against Ayouth and his star, Loubna Abidar. When the movie was apparently leaked prior to its screening, the Ministry was quoted as saying that, “it would not be screening it … and it is an outrage against moral values and Moroccan womanhood”, in addition to being a “flagrant attack on the Kingdom’s image”. The film was subsequently banned instantly without it ever being screened.

The Beloved was sympathetic to the prostitutes. They were not portrayed as the villains of the movie, and were presented in a warm and positive light: we felt their pain and believed their dreams. It was they who loved and cared about each other and those in their lives for whom they provided, and came across as if they were the ones with the real moral values, compared with the Saudi Clients or the police who were, in fact, portrayed as the real villains, cold and heartless, embroiled in the abuse of the girls, committing acts of violence and recidivist behaviour while committing moral wrongs. The girls’ scenes, in contrast, delivered witty and humorous lines, sometimes cutting, sometimes utterly vulgar and crude but their strength was overriding in their effort to determine their dreams through their vice fraught with risks, while suffering the slings and woes of their profession and of society.

I think Ayoush was particularly drawing attention to their plight but more so to the underlying theme of police corruption. He might have thought that by using prostitutes as a mere device through which to state views that are already public knowledge in a sensitive kingdom he’d somehow escape the outcry because in a supposedly moral society, whatever the prostitutes said would fall on deaf ears. For Ayoush, it shouldn’t have caused a stir, but only have reinforced the view of the ‘virtuous’ public. But how wrong he was, and no wonder the Ministry felt compelled to rebuke it, and have it censored. And I doubt it was to do with the prostitutes’ sexual endeavours but rather what was being said in the film.

For example, the lampooning of Morocco’s natural resources as being prostitution-based, that the sex trade serves Morocco as its only and best commodity, must have caused fury to reverberate along the corridors of power. Delivered in the scene where Beloved compared Saudia Arabia’s national resource of “gold liquid” with that of Morocco’s “gold girls”—that was derision wrapped in humour, and explicitly stated, not hinted at—suggesting that the prostitution industry should have been floated on the stock exchange. This was highlighting the sexual trade that is rife in the country: prostitution, homosexuality and paedophilia, what was Ayoush imagining—joking and suggesting that the continuous steady Saudi flow has kept the market afloat, and that the European presence in Morocco has pushed it upwards. The prostitutes’ jokes, never ceasing in this scene, had one more blow to deliver, that the current trend was focusing on boys under ten, and as young as one might “dare to think”. The transvestites who were not that old, anyway, further joked about being put out of business as their clients had a preference for much younger boys “these days”.

The Ministry would not have found that funny, and neither would it have found amusing the light in which the police were portrayed: those who were meant to implement the law were actually breaking it, and facilitating other criminals, accepting bribes as well as extorting money from the prostitutes. It would appear that the Ministry ignored the subject matter and conveniently forget that Ayoush was really only portraying what was part of the social fabric after having researched prostitution in Marrakech and spoken with some three hundred girls about their circumstances—the growing problem of prostitution and their treatment by the police and society, alongside police corruption and brutality. The Ministry sought to focus on pride, reputation, and virtue, not addressing the real problem. Censoring the film might avert the focus from the problem, or the stain endorsed by the film might just disappear, perhaps!

It was police corruption that received the most exposure in Ayouche’s movie, I believe, albeit the corruption was subtle, and played out in snapshots and montage-style fragments, but otherwise implied throughout the documentary, adding to its believability and shock aspect.

Pivotal to corruption was the painfully awkward to watch rape scene committed by the police chief upon the madam (who also took on clients), and which took place at the police station, in the knowledge of other officers. The police chief sees the rape, this time, as payment in lieu of dropping the Saudi’s alleged offences against her, but tells her to ‘pay’ the rest of the officers in the station before it could be finalised— it was indeed a potent symbol of that corruption. Implicit was that the police had accepted payment from the Saudi to execute the warrant, when, in fact, it was he who had committed the grievous assault against her friend and colleague. Having had already suffered the pain of her friend’s battery in the hands of the Saudi client, which had spurred her to attend his address, in the first place,  in an emotional cry protesting against what he had done, was indeed a significant, intense and emotional portrayal of the evils to which the girls had been subjected.

Enduring rape somehow came across as if it were a normal thing, in the hands of loved ones (as we saw with one of the prostitute’s boyfriends); and the police represented through jagged silences during and after rape events. Oddly, the girls complained to no one and didn’t cry for help either, and endured the horrendous violations in silence. The duplicity of meaning in the rape scenes extends to the treatment of the prostitutes in Morocco, whom the police and other men tend to mark for their lurid pleasures instead of protecting them. Ironically, in the film, it was the Saudis with whom the girls had consented sex.

Although the movie used the Saudi to portray the seedy, subversive underworld of vice, it also shone a spotlight on the Arab’s hidden homosexual pleasures, and which was totally all pervading as we saw in the series of photographs, the gay prostitutes, and the tales they unfolded, but which remained a sensitive and taboo matter as signalled in the prostitutes disgust, earning her a grievous thrashing.

Ayoush uses the continuous presence of the Police throughout the film serving as a constant reminder of corruption at the root level of the system, exploiting the girls sexually and extorting money from them. They committed and condoned real crimes. Perhaps Ayoush was saying that there is something rotten, not just in the state of the police, but in the whole criminal justice platform; and that money and power speaks louder than justice: The Saudi, through the police, was able to bring the prostitute to heel, and evading criminal charges himself. Those working within the system do it for personal gain and gratification rather than carrying out their professional duty according to the oath they’d pledged; instead, greed, personal gain, police corruption, brutality and criminality prevailed.

Clearly, prostitution keeps many afloat, and offers relief but breaks and shames families and society itself, whilst benefiting them in several ways as Ayoush illustrates—all grab as much as they can, but ultimately ending in the rejection of the prostitute. In the film we saw the mother complaining to her daughter (the prostitute madam) of not having enough to make ends meet, and then telling her to never come back to the home again as the social disgrace was too much too bear, which was prophetic and reflective of the Moroccan Ministry’s views representative of its people. The rejection of the movie is uncannily similar to that of the prostitutes it scripted.

The Beloved shows how rejection from main society forces prostitutes to live dangerously on its sharp-edged rim, with only a matter of time before they are fatally lacerated by it, should they remain within it. Their hopes and dreams rested in escaping to Europe, crystallised in the movie as their ultimate dream.

Overall, the film promised a lot, but delivered little. Its structure was haphazard, and the beginning, middle and end were merged into one long scene. We expected the villains to be punished, and the girls freed from their degenerate life or consumed by tragedy. It lacked the usual denouement, the unravelling of the events providing closure. For example, after the rape of the madam by the police officer the film came to a sudden end on the shores of Agadir with them all looking out across the Atlantic.

I am interested and interesting, having a vast appreciation for life and it's beauty which my writing can never reflect fully but endevours capturing just a small collection of some of my thoughts and the attempts to express them. View all posts by Lily Von Valley